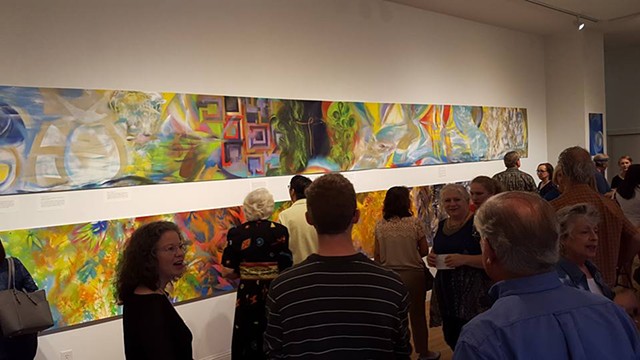 "From an early age, my teacher and mentor, Gustav Likan, instilled in me the desire to create beauty through color and form, regardless of the subject matter. My recent solo show at The Cove gave me the opportunity to show how several lines of inquiry thread through my work: music, artistic collaboration, new color palettes, mythic birds, and over 30 years of work in the design industry. These are the familiar themes, the influences, the context for my work."

Anne began her art studies when she was six, attending the adult classes of Gustav Likan at the Art School at Laguna Gloria in Austin, Texas. Mr. Likan's daring work as a colorist influenced her greatly, and he mentored her until his death in 1998. Anne's work also reflects the influence of traditional Japanese art and aesthetics which she encountered during an extended stay in Japan. Anne earned a Bachelor's Degree in Fine Arts from Austin College and three Master's Degrees from Yale University: Religion and the Visual Arts, East Asian Studies, and the History of Art. She has taught studio art for 30 years, mentoring and preparing students for higher education and career opportunities in the visual arts. Anne leads the Arts and Music Guild, and exhibits her work at The Cove, McKinney.